The Stuff Not Forecasted

Friday - Monday the forecasters were correct 0 out of 4 attempts in the wind department.  Well not totally wrong- they did get the general direction.  Friday and Sunday I wind skated while Saturday was epic SW at Belews Lake.  Warm weekend wind means more now than ever since Leah is doing great and Sambo is turning the learning curve into a doing straightaway.
Sam tried out a 10.5' SUP for the first time and was cruising like it was old hat right off.  A very impressive performance indeed- the transition to sailable SUP from beginner board is not a big deal once you understand using the rails.  My friend Joe came out for a while and we had 3 kits on the lake.  Joe is one of those natural athletes that is good at everything he tries.  It is pretty wonderful sailing with a crew on the lake.  Leah came around 3:30 after Joe headed out and rotated right in as the wind picked up another notch.  I was sitting in a chair trying to replace some fluid and didn't hear her come up.  She jumped out of the car with a big grin and was ready to go!  She has the comfort level to handle pretty much all lake conditions now so the hesitation in gone.  In no time she was planing on the ahd and 4.2 with perma-grin in place.
I had a problem.  I had been sailing over powered- when the wind picked up another notch I was still on the 7.5 and couldn't rig down since the other kits took the rest of my gear.  This is the good kind of problem though and after maxing the down and out haul I was back at it until sunset.  Everybody got their fill Saturday.  We all had an Italian carb feast on the way home and slept the sleep only possible after an epic day on the water.  I can't wait for more.

Approximate Wind for Saturday in Greensboro
Posted by rdm at 7:15 AM 3 comments:

Belews? What blues, I forgot em.

The wonderful warm and windy month of February went out with a bang Monday.  I've sailed 8 times in 2011- all at Belews lake and 7 of 8 in February.  The wind was SW save one NW day.  Monday was the strongest longest lasting SW blast I've ever seen at the lake.

I sailed from about 10:30 to 11:30 on the 85L stick with a 4.7  I kept out hauling and down hauling but eventually had to admit I was ill prepared for that much power.  I rigged the 4.2 and kept the 4.7 ready to go if needed.  Same story- from 11:30 to 2:30 it was more out hauling and down hauling until I realized I would have been fine with my 3.5!  It wasn't that silky constant Canadian Hole SW wind but for a little inland lake it was as good as it can get.  There was enough swell at the peak of the wind to rap around the west facing point in our cove and crash on my head while I was waist deep.  It kept howling until about 2:30 I guess and it fell off continuously as the edge of the front got close.

I struggled with arm and hand cramping probably resulting from routine exhaustion, dehydration and wetsuit circulation issues.  I certainly didn't come out of many jibes dry.  One of the most fun ever.  It was a good day tater.

Here is the lake when i rolled up Monday morning. 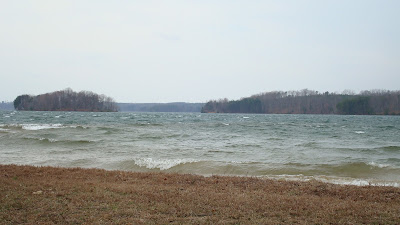 Recorded weather history at the GBO airport half an hour south of Belews.

Links you should check out

rdm
Greensboro, NC, United States
I'm a weekend warrior all about getting the most out of what NC has to offer. Wave sailing & surfing are my Fight Club. Most local action is with the Triad Windsurfing Club at Belews Lake in Stokesdale, NC. Email me if you are interested in windsurfing, surfing or paddling.